are just a bit too big for their own britches.  When Ozzie wants to play with a stick, he’ll settle for half the tree. 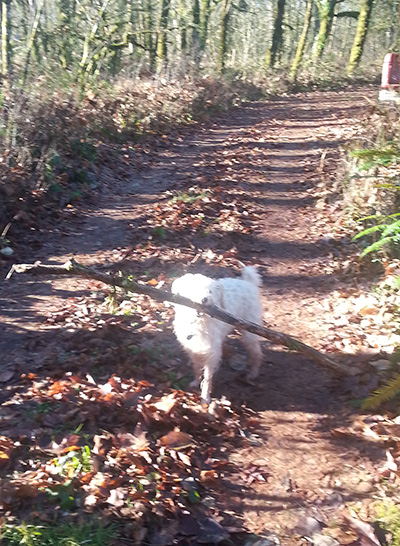 Pardon the picture quality, we were at the end of our 5.5 mile walk yesterday, and I didn’t have the camera, just the cell phone, so I did the best I could.

Unfortunately, being a tad too big for his britches also comes with the desire to misbehave or not pay attention when I’m talking to (or yelling at) him.  Ozzie has a grain allergy – he eats grain free dog food.  But, yesterday on our walk, he decided to eat a road apple, even though I told him to drop it and leave it (many times).  By last night, he was in obvious distress.  Breathing hard, scratching up a storm, and panting a bit.  I was ready to take him to the emergency vet, but decided to try some Benadryl first.  Fortunately, it evened out his breathing, settled him down, and a good lie down in the cool leaves in the back yard seemed to really help the itching.  He’s doing very well today, but he really gave me a scare.  I got very little sleep.  He’s a very smart dog, but I’m hoping that he’ll be able to put together that horse poop is something that makes him very, very ill.  I’ll be more vigilant in the future.

She had me tied to that quilting machine all day today.  I only got breaks to go and deliver three quilts at the quilt shop, run to Costco for some coffee (I was out this morning – talk about disaster!), and grab a small bite to eat for dinner.  Then I had to go right back upstairs and start quilting again.  She says I have three more quilts to finish before Thanksgiving.  Thank goodness two of them are very small.  Then, when I finish those, I have more coming in next week (not to mention the four that are still here but due in early December).  Then she says I have to clean the gutters, rake the leaves, install the new kitchen faucet (the broken faucet works intermittently, but she’s tired of running to the bathroom sink for water), and then I have to clean out the spare bedroom, paint the bedroom and the hallway, assemble some Ikea furniture, and put everything back in an orderly fashion.  I’m exhausted already!  And then I heard her make mention of decorating for the holidays!  Oy!  I’d report her to the state labor commission, but I’m self-employed, so I guess I’d best keep my butt out of hot water by staying mum on the subject.  Would any of you be willing to talk to her and ask her to ease up off me a bit?  She’s wearing me out.  Oh – and by the way – she told me today that this house looks like a tornado blew through it and I’d better think about doing some cleaning too.  There is definitely no rest for the weary . . . wicked . . . wobegon . . .weird . . . whatever!  It will be an early night tonight.