Here are the male puppies from Blue Mountain Schnoodles at 3 weeks.  Look at the little guy at the back.  Isn’t he just darling?  Well, the one with his butt to the camera is pretty cute too.  I think I would like either of those two.  I had asked for a cream colored one.  Still will need to see.

Well, if you’re a quilt.  I have been lucky enough to have been included in the USA group of art quilters who have done international exchanges over the past several years.  Our first exchange was based on the alphabet and was done between the US, Japan, and France — I had the letter M and did a cat sleeping on an M-shaped fence while it dreamed of Mice crawling up the boards.  Our second exchange was based on currency and was between the US, Japan, and New Zealand – I chose the Oregon Quarter and quilted a volcano to represent Mt. Mazama erupting to form Crater Lake.   Our present exchange is based on World Festivals.  I was given the Palio in Italy.  I found was wonderful photo on the web (webshots) wrote to the woman who had it on her webshots page, and got permission to use the photo.  Just as I was finishing the quilt to send off to the challenge, she wrote to say, “oh, THAT photo — it’s a postcard.”  OMG!!  Well, I didn’t have the name of the postcard company so I couldn’t write to ask permission, so I’m praying I don’t get sued as the quilt makes it’s pilgrimage around the world.  If anyone contacts me, I’d be more than willing to give credit for their wonderful photographic artistry.  I only wish the quilt were a better representation.  This exchange is also between the US, Japan, and France.  The quilts always debut at the Yokohama Quilt Festival in Japan.  ANYWAY, I don’t have a picture of the quilt (or the other two at the moment) to show you, but I did want to show you where the exhibit of our quilts is at the moment, and where it will be until August 23.  Oh, if I could only go and visit the quilt!

This is the Nogent-le-Roi Castle in Beauce, France, which is very near Chartres and the famous cathedral.  Heck, if I can’t be there with the quilt, I would settle for wracking up all of it’s frequent flier miles.  I could probably go around the world several times on the miles of these three little quilts.

Here are the male puppies at 2 weeks!  Their little snouts look pretty schnauzer-like to me, which is cool, because that is what I want.  Their little eyes are starting to open, so I imagine they’ll start becoming lots more active.  For now, they seem to have a knack for staying all together to keep warm. 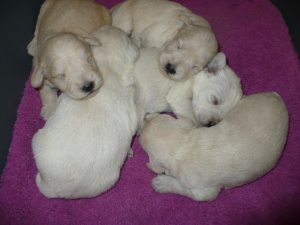 Keeping warm in Oregon will not be difficult for the next week or so.  We’re just about at 90 degrees fahrenheit now at 3:30 p.m.  I imagine we’ll hit 92-95 today.  It is supposed to be over 100 on Monday and Tuesday.  My sister and BIL are visiting.  I think we’ll spend Tuesday at the coast!

My new bundle of joy was born just one week ago today, but is apparently, growing quite a bit already.  I don’t know which one of these little guys I will choose as my own, but one of them is coming home with me at the end of August.  I have second pick of the males.  There are five of them:

And here are the little guys on their one week birthday:

As you can see, their little ears are no longer a bright pink, their little noses are already turning black, and they are getting quite plump.  I think they must have a really good momma.  I originally thought I’d like one of the cream colored pups, as I would have a terrible time keeping a white dog clean, but now I’m not so sure.  I think it will take a bit until I can see their personalities developing in their pictures before I’m able to pick one out as my own.

So far, I’m thinking either Captain Jack Sparrow as a name, or Atticus.  Again, this will depend on personality.  Captain Jack, as we know, is a bit quirky and fun.  Atticus (from To Kill A Mockingbird) was a kind, gentle, but righteous man.  What better than to name your dog after characters played by the incomparable Johnny Depp or Gregory Peck?  We’ll shall see — oh yes, we shall see.

Well, I was already a cat mom, but now I’m a puppy mom!  Lola (my puppy’s biological mom) delivered Nine (count ’em 9) puppies on July the 11th (Sisters Quilt Show Day).  There are five males and four females, and I have second pick of the males.  I’m sure it will be difficult to pick one.  I get to bring my little bundle of joy home the last weekend in August.  I’m supposed to be away at the coast that weekend, so I guess I have a few things to work out.  We’ll see how it goes.  I’m so excited.  I already have treats and toys and a leash and collar.  I have a kennel that I’ve used for the cats, but they never go anywhere.  BB&B has a foldable one that I may pick up with the coupon.

I’m still amazed that a 13 lb. mini-Schnauzer had 9 puppies!  Pictures to come soon.

Okay – I’ve had weight loss surgery, but I still love to eat.  I went outside this evening to grill a nice ribeye on the barbie.  Yes, I cut most of the fat off first, and I can barely eat half of the steak.  While I was grilling, I took a look around the back 40, and look what I found.

No, not the former mayor of Washington, DC.  Marionberries are classified as a blackberry.  They are a cross between the Chehalem and Olallieberries, which are descended from crossing Raspberries, Blackberries, and Dewberries, going through Loganberries and Pacific Blackberries on the way.  Anyway, you can look all that stuff up on Wikipedia.  The important thing here is these are delicious!  Once I digest my wonderfully grilled steak (a couple of hours work), I will probably put a little bit of Splenda and some half-n-half on these and have them for my dessert.  Oh YUM!  While I don’t love days when it’s close to 100 degrees, I do love the abundance of summer.

Well, it was another scorcher here in Oregon.  I went to a barbeque at my brother’s in-law’s house (my brother married my best friend [at the time], so now she’s my sister in law).  It was so hot out, we ended up eating in the house instead of staying outside.  It was funny – all the younger folks were in the kitchen, while my brother’s father-in-law and his 90 year old brother were in the living room watching Wayne’s World!   I guess the heat does strange things to people.  At any rate, it was fun to see family and friends again.

Out on the deck before it got too hot 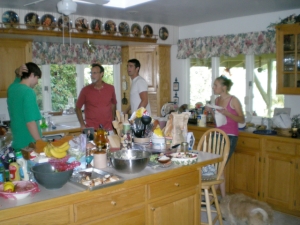 Every party needs a baby! Phoenix with his mamma, Lacey 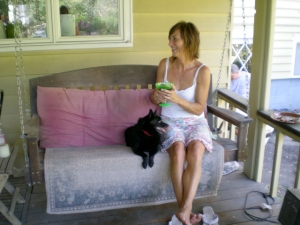 Phoenix's Grandma, Feather, with Ursula the Skiperkee. My brother Ted at the grill in the background.

Phoenix with Ursula and Leelu

Hope you all had a great 4th.  I’m back home, I’m too full, but the air conditioning is on full blast.  Ahhhhhh!