Well, it will seem so in my Fitbit stats, anyway.  I had to take a break today and get a bit of house work done.  Then I decided to take my dog to the dog park.  If you’ve been following for very long, you know that Ozzie likes to get into the pool at the dog park and drink his water while he’s lying in it.  I think it helps him cool off too.  Well, there was a clean up and renovation at the dog park recently.  They did some mowing, paved some spots that tended to get muddy by the entrance gates, and they threw out the pools!  When we were there yesterday, Ozzie was so confused.  I could tell he really did not want to drink out of the bowl, and he would just stand in the pool area and look around for the missing swimming pool.  So, today, instead of just going to the dog park, we went shopping for something suitable for taking a dip at the dog park.

At this time of the year, this was no easy task, so our trip to the park, which usually takes all of an hour and a half, took about 3 hours.  The tub we bought was smaller than I wanted, but it’s tough enough that the big dogs won’t poke holes in it with their claws in short order, and it’s big enough for my boy to lie down and get his drink!  It’s also a great way to wash off muddy paws before leaving the park to go home.

So, this was my donation to the Alton Baker Dog Park.

Who knew?  What a day to be without my good camera.  Well, I did have the camera, but took the SD card out of it last night to upload some photos of Mt Hood and Mt St Helens yesterday and forgot to put it back in the camera.  We took our morning walk around the pond and met friends of my sister’s who were playing with their own Australian Shepherd.  They were throwing the stick into the pond and Ozzie, who never lets anyone beat him to a ball at the park, decided that no one was going to beat him to the stick either!  With his very long and skinny legs, he doesn’t really dog paddle, but does the full stroke.  I thought for a while that I was going to have to dive in to help him, but he did just fine.  I got a few snaps with my Droid camera — not the best, but you get the jist. 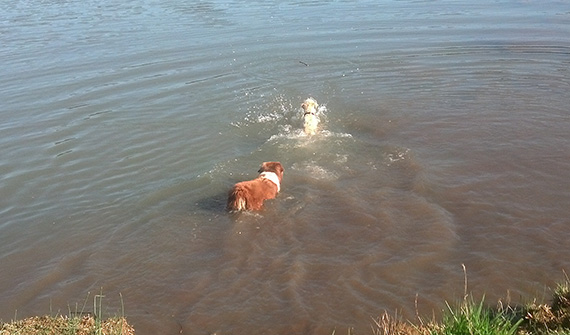 My crazy little dog.  I sure do love him.  Oh, and here’s a picture from about a week ago that I forgot to post.  Ozzie and his cousin Kallie, or, as we like to call them, the Kickbusch Branch Managers! 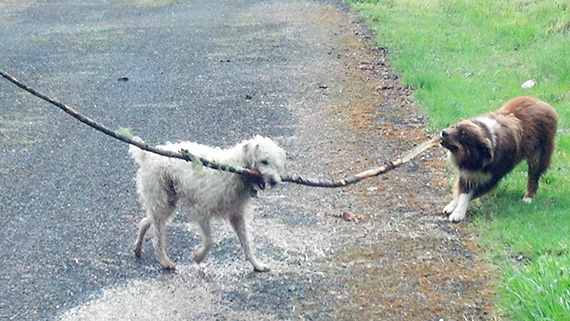