Getting into the groove of the New Year has been a bit of a struggle.  I’ve really wanted to be out walking with the dog, and I have been doing that quite a bit, but my right foot/ankle is really giving me trouble, so I don’t know how much walking I’ll be getting in.  My Fitbit stats were supposed to be showing up on a weekly basis here, but since the last time they appeared was the 6th, I think something has gone wrong there.  The other thing that went wrong this week was a bit of a mishap on the trail.  Ozzie and I have worked our way up to about six miles a walk.  We’ve been on the paved paths through the park for a good portion of our walks, because the new bark is so thick and soft, it feels like walking in quicksand.  As I said before, we’ll wait till some of those swift gazelles pack it down a bit before we go back to bark.  Sharing the paved bike trail has never been a problem.  After all, it’s only me and a little dog.  You see many folks out with their kids in a stroller and they take up quite a bit more room than we do.

Anyway, on Monday afternoon, Ozzie and I were very near the far easterly end of our walk (see below on the map) 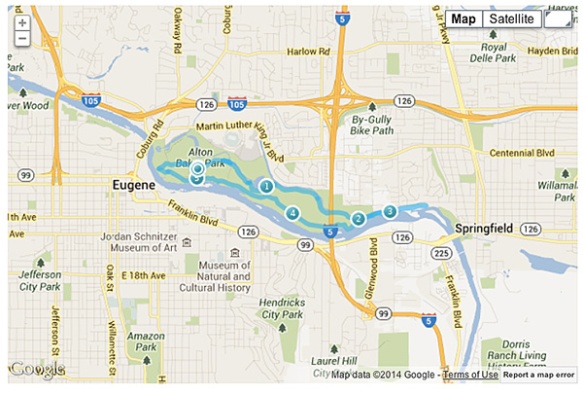 It’s a bit more than three miles from the car and I was already out of gas, wondering why I was so very tired, when Ozzie decided he wanted to sniff something over on the left side of the trail.  Dogs do sniff — especially male dogs.  If they smell a rival or some hot babe, they have to mark and leave their scent, just as their little calling card or Facebook post, as it were.  So, I went over with Ozzie and I saw a bike coming towards us down the trail, so I stepped up off the trail and pulled Ozzie close, tightening his leash.  The bike rider continued straight at us, and I mean straight at us, in a forced collision course.  I finally yelled “HEY,” and he yelled back that I was on the wrong side of the trail.  Hmmmm.  Mr. Rules, how do you know the direction in which I was traveling?  And, since the trail is about 10′ wide there and there was no one else around, what the hell difference did that make?  At any rate, I yelled back, but I won’t repeat what I said here.  I may not venture down in that area again until the pepper spray I ordered arrives in the mail.  If he tries that again, he will get a face full of it.

Most folks are so friendly and kind.  I guess it takes a real jerk like that to make you really appreciate the nice people.  I will say that I did appreciate the adrenaline rush I got from the fight or flight experience.  It did propel me all the way back to the car.  I had been worried that I didn’t have the energy, but in the end, I had more than enough.