. . . or, the bread also rises.  I decided before I napped with the kids, I’d throw all the ingredients for bread into my bread maker and let it whip some dough up for me.  As those of you who read this blog often know, I have a blood sugar problem which prevents me from eating simple carbs (bread, rice, pasta, etc.).  So, I have been on the search for breads with a low glycemic load.  This means they have to be made with ingredients that won’t spike my blood sugar, which will cause my blood sugar to plummet really quickly.  Over the weekend, I tried a recipe in my Low Glycemic Load Cookbook.  It was disgusting, and I mean that in the strongest of terms.  It did not rise well, it was gummy, chewy, and just ew, ew, ew.  I had two bites, considering well on the second bite if I could ever eat it again (NO), and threw the rest out.  I did a bit more reading and learned that sourdough bread and pumpernickel bread generally do not have a huge effect on blood sugar, so I thought, what could be better than sourdough pumpernickel?  So a few days ago, I made the sourdough starter, and today I threw all of the ingredients into the bread maker.  Once I made sure it was all mixing well, I went off to take my nap with my pets.  Actually, I decided against lying on the floor, and went into my bedroom with my quilt.  Within a minute, I had three pets snuggling with me.  We dozed off and about an hour later, the alarm went off on the bread maker.  I staggered into the kitchen, got the dough out of the machine, shaped it, and put it into the bread pan (which I had had the foresight to prepare before I napped).  I covered it with a wet towel, and went back to sleep.  Yep, I was still too sleepy to stay awake.  I finally woke up about 2.5 hours later, and when I walked into the kitchen, the bread had risen nicely.  I preheated the oven, put the bread in, and 45 minutes later, voilá! 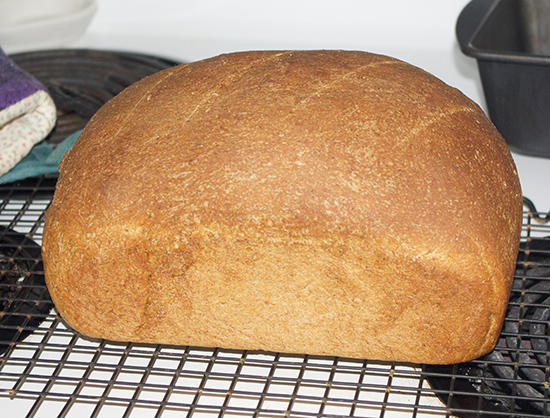 It’s really dark, but that is because it’s made with dark rye, molasses, and cocoa powder.  And, it is really, REALLY good.  I’ve got about another 30-45 minutes before my blood sugar should bottom out from eating bread, so if I make it past that and am fine, this will become the bread that I can eat.  I’ve got a few smarties and a piece of cheese at the ready in case I crash, but I have a good feeling about this.  Actually, that may be because this is the prettiest loaf of bread I’ve ever made.